Well, 2019 is now at an end. It was a rough year for me but I have made progress in several areas. There is still lots of room for improvement. I aim to make 2020 much better. After all, tomorrow is another year.

So I left off in 2017 telling you all about entering art at the fair. We did and we won! We entered in 2018 too. My students scored some ribbons in 2019 also. Watch this space for details.

2019 had some workshops. More about those right here soon.
Posted by Dianna at 11:08 PM No comments:

The Knife workshop was a lot of fun. Here are two of the paintings. I will show you the others as they become available. Mine had a couple of accidents on the way home. I will share it with you when I have finished repairs. Here is Rhonda's picture. 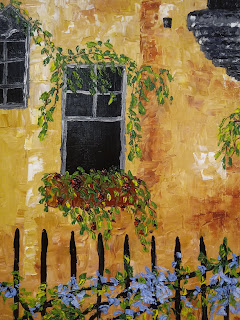 This is Nancy's painting. Soon I hope to show you the other 4 paintings from this class. 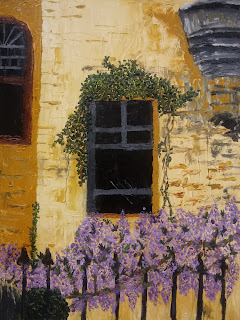 Tuition for regular art lessons has changed as of March 1st, 2019. Classes are now $25 per 2 hour session + supplies. Special workshop prices will be announced as they are scheduled. That said, there will be a knife painting workshop at the Clinton Hwy. Hobby Lobby on March 12th at 12 noon. Tuition for the special workshop will be $30. This is a 4 hour class. Call me at (856) 236-4959 with questions or to sign up. See you in class!
Posted by Dianna at 3:32 PM No comments:

Now that 2018 is over and gone, I will try to catch you up on what has been going on with me. I am sure you noticed my rather long hiatus from the blog. I checked in and made corrections and a few improvements but haven't posted since the summer of 2017. I have been dealing with some health issues and other problems and general busyness. My eye troubles began In August of 2017. I moved from my apartment to a house in October. By February of 2018 I was hemorrhaging in my left eye. This left me essentially blind in what was previously my dominant eye. I began having problems with mu feet also.

Both these medical issues were due to diabetes. I have been getting injections in my eyes every month since to prevent more bleeding. My eye is improving and the outlook is good. I had to learn how to do a great many things differently because of my limited vision. Even so I managed to continue teaching and even painted some last year. I had to move two of my classes to another location because one of the Hobby Lobby stores was remodeling. I decided to keep the new location in my schedule after we were able to go back in November.

My right big toe became infected in the summer of 2018. A similar problem on my other foot had improved but not yet healed. At the same time I had a sinus infection I couldn't seem to get rid of. Then my house mate moved to Alaska. I had not lived alone in nearly 20 years. What an adjustment.

I was so tired all the time from the infections I would come home and fall asleep in my chair nearly every day. In December my foot was getting worse which meant another trip to the emergency room. I was admitted to the hospital on December 23rd and spent 11 days there. They immediately put me on insulin and IV antibiotics. My toe was amputated right after Christmas. That was a breeze. I had little pain but was weakened by the worst respiratory infection I have ever had. I literally fought for every breath. I won't go into details about my hospital stay but it was awful and I am so grateful it is over. My blood sugar is under control and I am back at class. I still get tired but I am getting better every day. I can breathe and walk. Life is good.

One of my goals this year is to post to the web site more often. That should be easy since I did not post at all last year. Here's to the end of a long dry spell. I will let you know some of the things my students have been up to soon. We have some great news to share.
Posted by Dianna at 12:14 PM 1 comment: